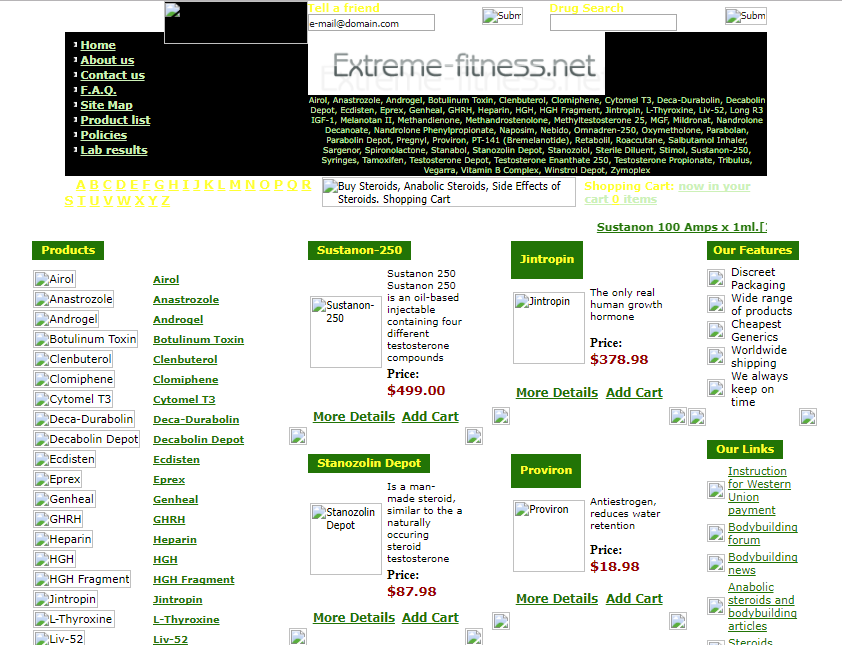 Extreme-fitness.net was an online drug store that started in 2005. Their promises included providing high-quality products, best care, and low-priced medicines. This internet shop can dispense your medicine without asking for a prescription and they will deliver it in discrete packaging. This online drug store is no longer active.  The location of this internet shop was not disclosed by its owners as well as the date it closed down.

As a fitness website, the most popular medicines sold by extreme-fitness.net were drugs for bulking up or anabolic steroids. Among the medicines they sold was HGH, HGH fragment, Decabolin Depot, Deca-Durabolin, Clomiphene, Cytomel T3, L-Thyroxine, Liv-52, and Heparin. A further check on the product list of extreme-fitness.net showed that they focused on anabolic steroids and bodybuilding drugs. No ED medicines can be found on their list though.

Extreme-fitness.net is now inactive and most of the information gathered for this site were from web archive and third-party review websites. With the limited information that web archive has for this online pharmacy, I was not able to determine the prices of the medicines offered.

With the limited data I have, I was not able to find out as well whether the medicines offered by extreme-fitness.net were safe or FDA approved. According to their FAQ page though, they process prescription medicines legally unless the destination country has strict laws regarding drugs.

Ordering from extreme-fitness.net was pretty easy and it was only done online. They do not accept phone orders. Payments accepted by extreme-fitness.net included credit card and through the Western Union. Other modes of payment such as through check were not honored because it takes a month for checks to get cleared and extreme-fitness.net doesn’t want to put up with such long delay. Once the payment was received or confirmed by the customer’s bank, an email will be sent to the customer to confirm the successful order. The order will be forwarded to their pharmacy for dispensing. The minimum amount of order in order to be processed was $10 and the maximum amount was $500.

Extreme-fitness.net used Registered International Airmail for their customers’ orders. On a regular scenario, orders can arrive as fast as 15 days. Delays depend on different factors such as current laws on the country of destination and the local postal service. Extreme-fitness.net promises to deliver to any country that allows importation of medicine. The price of shipping was not disclosed and the refund and the return policies are no longer available.

This online pharmacy was reachable through their ‘contact us’ page. They also have a customer service team that operates from Monday to Friday at 9:30 in the morning until 6 in the evening (European GMT). They can be reached as well at [email protected].

Extreme-fitness.net started operation in 2005. The last captured image of this website was in 2012 (web archive capture) hence I am assuming that it operated from 2005 to 2012. With seven years of operation, I assume this internet shop had hundreds or thousands of customers already. With such number, would it be possible to find a customer review that can determine the reliability of this website?

After searching for reliable customer reviews for extreme-fitness.net, I found some from pharmaciesreview.com, a third-party review website. An anonymous customer shared that everything he ordered arrived and it was great. He gave extreme-fitness.net a 5-star rating.

Another customer review was shared by Roger in 2011. Roger said that he paid through the Western Union and he received his order after two weeks. According to Roger, the medicines he received look exactly as it was shown on the website. Roger gave this store 4 out of 5 stars.

Another third-party review website had customer reviews for extreme-fitness.net.

Slim_one shared in eroids.com his experience four years ago. He said he ordered his drugs and received it after six weeks. The drug he ordered was Anavar and it looked exactly as the one in the website. Slim_one said he was sad to learn that the store had closed.

Shhhh shared 5 years ago that he received his order from extreme-fitness.net and it was with good quality. He said he always experience delays in delivery but then he always ended up receiving them. He still considers this online pharmacy as a reliable source of his drugs.

Eroids.com and pharmaciesreview.com were two third-party websites that publish customer reviews for online pharmacies. The story of Roger, Slim_one, and Shhhh can be considered as real because these appeared on these sites. I would say that perhaps this online pharmacy was a reliable store, they just had poor customer service and delivery service.

With mostly positive feedbacks from their customers, I went ahead and check the current status of extreme-fitness.net from legitscript.com. Legitscript.com was a monitoring and evaluation website that checks the status of online pharmacies.

According to legitscript.com, extreme-fitness.net was a “rogue internet pharmacy’. It means that it is not adhering to the rules and policies set by legitscript.com to be considered as a legit and genuine online pharmacy.

From scamner.com, the result of the analysis showed that extreme-fitness.net was not a website worth trusting. It showed that it had 0% safety rating and that browsing was not advisable. Customers who were planning to buy from this site were advised to stay away from it as well.

Extreme-fitness.net started operating in 2005 yet there was no information about any coupons or promotions that they could have used. The coupon code is an important marketing tool and without it, it is impossible for a website to win new customers. It is possible that web archive had not captured any of their promotions in the past or that they had been closed for too long that some of their data no longer exists.

Extreme-fitness.net was an online drug store that started operating in 2005. The medicines they offered were mostly anabolic medicines. The information saved on this website was limited as well as the information from third-party websites.

This online pharmacy had customer reviews from third-party websites. Most of their feedbacks were 4 and 5-star ratings and talk about how good their service was. Their customers also said that they deliver although most of the time, the deliveries were late.

Reputation analysis from legitscript.com and scamner.com revealed that this site cannot be trusted because of possible risks. According to legitscript.com, this was a rogue pharmacy while scamner.com said it had 0% safety rating. Despite having such negative review, the good customer reviews of extreme-fitness.net had some weight hence I am giving this online pharmacy a rating of 3 out of 5 stars.