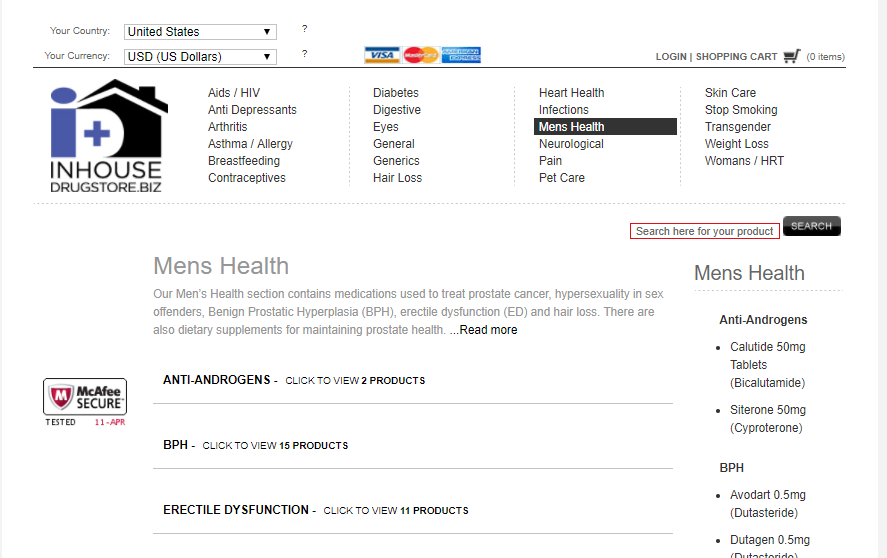 Inhousedrugstore.biz was a web store in the distribution of prescription and over-the counter drugs. Its virtual shelves used to house Erectile Dysfunction recipes, anti-depressants, anti-allergies, hair loss remedies, contraceptives among others. Concerning its pricing I wouldn’t comment much because it was relative to the amount I spend at the local stores on original drugs for instance; 50mg of Viagra went for $ 16.00 per pill while that of 20mg Levitra used to cost $ 22.50 per tablet. These drugs used to be sourced from licensed manufacturing plants across the globe in addition to being FDA approved. The site had its physical location in Vanuatu since 1996, and 22nd October 2014 is the last date on its captions from the internet archives. It claimed to have offered top notch branded and generic medications to its clients in most of the countries around the world.

Contacts used to be generated using the telephone numbers, fax in addition to the email and the contact form provided on the site. The e-store informed its clients on their availability hours which was in line with the Australian standard time whose day-time differ from the rest of the world although it guaranteed to address their concerns within 24 hours. Its payment options were flexible and popular in that the Visa, JCB, Master Card, American Express and Debit cards were all accepted. The shopping had been promised to be secure for its users because there were regular audits which ensured that the site did not indulge in unethical acts on the expense of its customers using the information provided by the cards. Shipping used to be done using the standard and registered air mail which was not only void of the transportation expenses but also with an approximation of (7-14) days to deliver the consignments.  The other options were the Express mail service and the FedEx which were estimated to take (5-8) days to exchange the possession of the parcels from the store to their final consumers. I would have liked to highlight their average charges, but that information was not at my disposal, however, details concerning its refund policy were generously shared. Consumers were urged to ensure that the regular navigation process had been achieved in addition to providing the correct shipping address and to inform its support team within (8) weeks following the dispatching date; prior to requesting for compensation which came in the form of a free reshipment and a cash refund. Those who fell victim to defective or incomplete packages were also considered in sharing the same benefits.

I was eager to get the feedbacks from its clients who had been said to have been offered nothing short of excellent services and quality products; unfortunately, inhousedrugstore.biz had no reviews.  It reminded me of my first time to embrace online shopping when I tried to save some money through getting some weight loss pills from a particular e-store. The prices were not only pocket-friendly but way below my budget, and as a young person I decided to take the risk and give it a try, after all, I was well known for having my heart on my sleeves. Perhaps that time I had overdone it by sacrificing my health but what else was I yearning beyond getting into shape and putting an end to bullies? First things first, the pharmacy kept its end of the deal by getting the goods to my door, but more than half of the tablets were broken. That was when I tried to contact it to deliberate on the way forward only for it to give a flimsy excuse as to why I had to bear the loss all alone. After that, I tried to see how it had been rated by other customers but it had no user feedbacks on its site which made me learn a valuable lesson on the significance of testimonials. It was during the same period when I realized that scam analyzing tools are resourceful in identifying frauds.

The scam consultants were not in favor of Inhousedrugstore.biz an example being the scamadviser.com which reported that the site was not safe for consumers since it had been accorded a low trust rate of (3 out of 100) %. The web store had also been speculated to have been located in the United States in addition to being a malware to some of its users.

It had also been said to have had a domain ages that was slightly above two years with a small popularity profile based on its few visitations that it used to experience.

Inhousedrugstore.biz had no coupon codes although it offered free standard airmail shipping services to its clients. I would have been pleased to find out whether it gave free blister strips, loyalty points or discounts on returning orders similar to its competitors but there was no evidence to support those saving options.  Online shops invest in many ways of assisting their customers to have a continuous supply of medications without straining to attain the budget which in most cases leads to additional stress.

You would agree with me that a vendor who sells authentic products at throw away prices or in conjunction to avenues of making the medications inexpensive tends to share in the interests of a majority of users if not all.

Inhousedrugstore.biz has no user feedbacks concerning its services and products on its site or other user reviewing sites. It was disgracefully rated by the scamner.com as it had been accorded (14 out of 100) % trust rates in addition to being a malware to some of its users. The virtual drug store had its consumers interest at heart as it provided them with free shipping services, which did not convince me enough to increase 1-star out of 5 rating which I typically award vendors who lack credibility and user remarks.