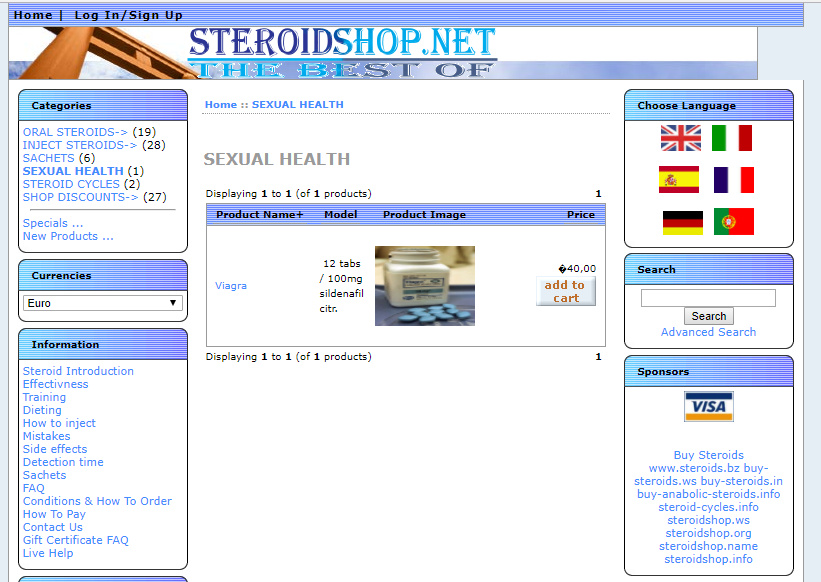 Stereoidshop.net used to be an online steroid store located at various points within Europe and had claims to have influenced the market for a decade before its closure. Its clients were at liberty to purchase the amounts of products they needed as long as they had consulted the lawyers to ensure that it was legalized to do so in their countries. In addition to that was that a prescription was not needed to possess the narcotics although buyers were strongly advised to consult a professional before consuming the steroids as they demand a certain consumption limit per cycle. The main categories which housed the medications were; oral and inject and sachets steroids for bodybuilding purposes and the enhancement of sexual health. The latter had 20mg pills of Cialis in a pack of 50 pills being sold at $22.93, seven sachets of Kamagra Jelly each containing 100mg going for $ 25.23 and 23 tablets of 100mg Viagra used to be priced at $28.67 under its wings. However, these were not the best sellers since that list was entirely occupied by Androlic, Winstrol, Sustanon and Deca Durabolin among a few others. Clients were assured that the products were of high quality as they were obtained from the best manufacturers in the world but there was no indication of them being FDA approved. To consult the seller via the support team customers were urged to make use of the website as a platform for most of the e-shops activities were conducted there. Clients who were believed to be globally distributed made use of the credit cards and the wire bank transfers as this was the acceptable means of payments. Other than being informed of the shipping charges which were $ 17.20; that were also applicable to PO boxes these navigation methods were not disclosed just as the site was not specified on its physical location. The review segment seems to be having a handful of remarks from its consumers which I don’t mind spending a few minutes on.

There were comments posted five years ago the first reviewer being the Mr.Getting big who was complimenting the site for responding to his concerns accordingly and selling top notch products; He mentions a situation where he benefited from a reship.

The next two comments came from Timinator who was not so confident about the effectiveness of the steroids he had purchased although he attributed the minimal change he experienced to his age which had advanced from 45 to 52. He also comments that the drugs resembled the ones he had viewed from the website and thus making him conclude that they are original. 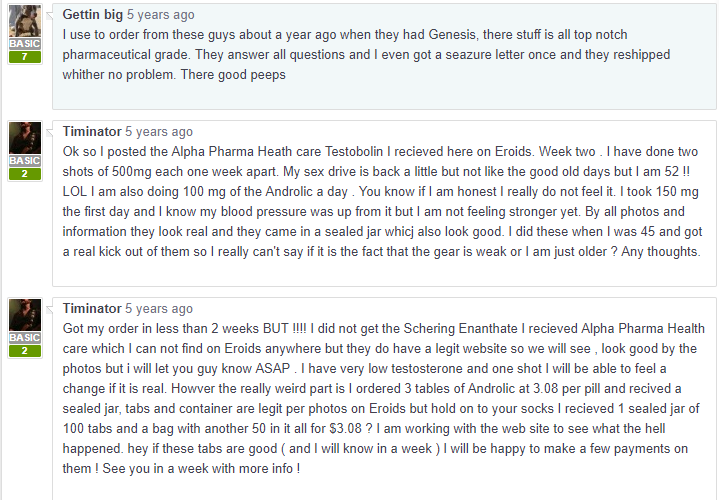 He then publishes his second comment by talking of how he had received his delivery within two weeks although it had an alternative of what he expected and was optimistic about it since the site appeared to be credible. It was odd that he had ordered three tablets only to get a parcel with a hundred of them at the price of three and another one with fifty of them for the same price. He questioned the quality of the pills but promised to pay some extra fees once he finds them to be helpful.

Steroidshop.net has been found to have had a high trusting which exceeded the 80% mark out of 100% according to the scamadviser.com. The United Kingdom- based e-shop was also reported to have unknown popularity despite having a domain age that was more than three years old.

That being the case buyers were encouraged to shop from it a statement that would have been practiced if it had not exited the internet.

The scamner.com, on the contrary, rated the pharmacy a safe rate of (4 out of 100) % stating that it used to be rarely visited and having a similarity with the former scam consultant on the age of its domain. It is quite confusing to have parallel findings of the fraud vendor from the scam analyzers.

A shop that tags its activities with its buyer’s mindset more often than not get to make lots of sales since establishing a convenient point of intersecting with the consumers is two way. That can be achieved through promotional discounts as well as percentage cut offs for new customers or for those who make reorders. Another way of going about it is through loyalty points to various products where buyers feel the gains in being loyal to a certain drug which is not only economical on the price but also beneficial to their health. Some e-shops extend this by offering their bulk buyers free navigation while others provide that to all its orders. Issuing free drugs as an award to clients is another gesture of meeting their expectations as well as creating a lasting impression on the consumers which do not go unrewarded. Stereidshop.net did not have the above mentioned for no particular reason, or perhaps it was about to pave the way for them before it drew its curtains from the internet.

Stereidshop.net had true and positive comments from its clients who must be feeling its gap in the market as they hustle for refills. It also emerges to have had a high trusting rate that exceeded 80% out of 100% from the Scamadviser.com; however, the Scamner.com doesn’t seem to be in line with that as it grants it a (4 out of 100)% safety. Nonetheless, it chose to go offline without informing its users and lacked a single means of encouraging its buyers to save some money with that; I accord it a 2-star rating out of 5.